The rise of the Phoenix Suns to win the 2021 NBA Championship is not down to pure luck.

Yes, this season, there has been a fair share of star player injuries, but you know what, every season has key player injuries. So to give credit where credit is due, and let’s praise the Phoenix Suns for it’s achievements for this season. 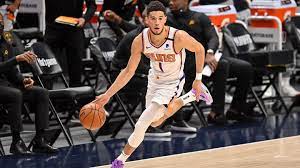 The team is built around a solid, group of players. Among them is superstar Devin Booker, a player who is often underrated by the public and peers despite being the one of the team leaders. He has turned a team that was last on the league only two years ago to championship team.

Perhaps Booker’s stellar performances is often overshadowed by the ageless stalwart – Chris Paul – described as Point God. Paul’s narrative of one of the greatest that was yet to win a championship resonates well, and legitimately so, but let’s not forget that Booker is an outstanding player and is showing greatness in his own right.

Booker is still young, at only 24 years of age. Yet he has achieve so much. Let’s go through top 5 facts that makes Booker so special.

At only 18 years old, Booker was the 13th overall pick in the 2015 draft lottery and has been with the Suns ever since.

Despite being a momentous occasion, the Suns lost to the Mavericks 111-95.

2. 40 point triple-double in the playoffs 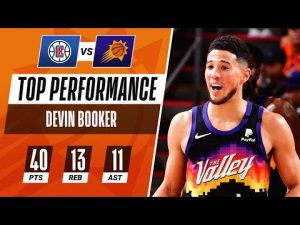 Devin Booker is the third youngest player in NBA history to record a 40 point triple-double in the playoffs at the age of 24 years and 233 days.

He recorded this against the Clippers in the first game of the Western Conference finals notching 40 points, 13 rebounds and 11 assists. The Suns desperately needed this strong performance from Booker, with Chris Paul out of the game due to Covid-19 restrictions.

The only two players younger than Booker to achieve a triple double in the playoffs include Luka Doncic and Oscar Robertson.

Doncic is easily the youngest at the aged of 21 and 177 days old. This too was against the Clippers in Game 4 of the 1st round of the playoffs.

Oscar Robertson remarkably achieved a tripe double in the playoffs at a young age, not just once but twice! He achieved this in 1963 playing for the Cincinnati Royals at the age of 24 years and 117 days old. 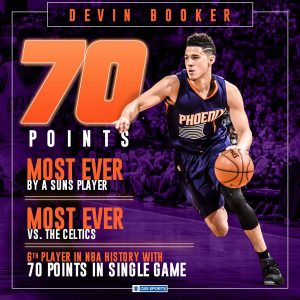 We all know that Devin Booker is a great scorer, but did you know he reached 70 points vs the Celtics on March 24, 2017.

Although the Suns eventually lost to the Celtics 130-120, Booker became the youngest player to reach 70 points in a game.

In addition, the only other players to ever score 70 points or more is Wilt Chamberlain, David Robinson, David Thompson, Elgin Baylor and Kobe Bryant.

This makes Booker only the sixth player to ever achieve this feat. Bryant was the most recent of these players to score 70+, which was 81 on January 22, 2006. 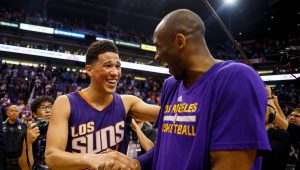 Crossing generations, Booker was able to form a bond with Bryant.

One of Booker’s idols and role models that he looked up to was Bryant, and fortunately Booker was able to play against him.

During the last game of Bryant’s career Book emulated his own moves against him! Some would say that this was arrogance and audacity that borders on disrespect, but Bryant took it in his stride and had a good laugh.

After the last game of his career, Bryant gave Booker personal life long advice, simply put “Be Legendary” which was subsequently tattooed on Booker’s arm.

Bryant was instrumental in defining Booker’s drive of becoming a better player physically and mentally.

5. 3 Point Contest during All Star

Booker in the youngest to be invited and participate at the 3 point contest in 2016.

This was his rookie year and managed to reach the final round of the contest. The show down in the last round was against the great Klay Thompson, who was having a scorching hot year with the Golden State Warriors. Though it wasn’t to be for Booker in his rookie year, in 2018 Booker returned and was able to win the contest.

Winning the 3 point contest is indicative of how good a shooter Booker is (if there was any doubt).

6. The Curse of the Kardashians 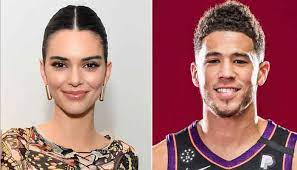 If you don’t know who the Kardashians, they are a family in the US who is famous for……their antics? Okay, that’s a bit rough, but their popularity stems from being in the entertainment industry, most through reality TV, social media, fashion and a splash of controversy.

The family members consist of parents – Robert Kardashian and Kris Jenner, children – Kourtney, Kim, Khloé, and Rob Kardashian and grandchildren. Caitlyn Jenner (previously named Bruce) married Kris Jenner (after a divorce with Robert) and together they had two daughters Kendall and Kylie Jenner.

As you can see, there are a lot of women in the Kardashian clan and many of them have had relationships with NBA players.

What is the Kardashian Curse?

It has been observed through basketball fans, that any NBA player who has formed a relationship with the Kardashians has led to their demise in NBA basketball success sprinkled with off court spite.

Of course, this is all speculation and gossip with causal relationship of basketball failures impossible to establish.

However the following big name players of the NBA: Ben Simmons, Lamar Odom, Tristan Thompson, James Harden and Kris Humphries have all had “issues” and undoubtedly huge distractions to playing ball.

Devin Booker is dating Kendall Jenner (one of the five Kardashian sisters). And he has broken the Kardashian Curse with his success!

Devin Booker is a winner.

He is driven and has ambitions to take his game further. With the right mind set and hopefully a continuing support cast that is strong and stable, Booker has the ability to become a Hall of Famer.